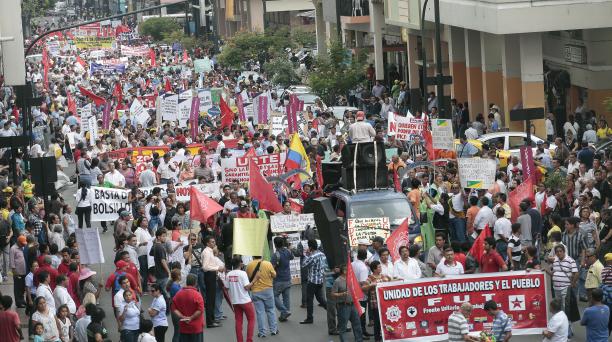 Although, in a lesser magnitude than in Quito, in some cities of the country marches of unions and social organizations that joined the call for national mobilization to express disagreement with the government were carried out. In Cuenca, Guayaquil, Riobamba, Ibarra, Ambato, Latacunga, Portoviejo people expressed themselves.

Flags of the Popular Front and the UNE dominated the march that took place yesterday in Cuenca. Groups of workers and teachers led the protests that began in the San Blas park at 17:00. College students, politicians, lawyers, cyclists and traders participated in it. Three blocks were occupied by the demonstrators.

“Here we say again to the Regime that workers are standing against the policy of the so-called citizen’s revolution,” said Edison Déleg, leader of the Coordinator of Workers and Social Movements of Azuay.

Meanwhile, in Guayaquil, the march was led by the Network of Retirees, but unionized staff and independent sectors also participated. Some expressed their opposition to oil drilling in Yasuni and other demanded the extradition of Pedro Delgado, refugee in the US.

In Ibarra, protesters shouted watchwords against the constitutional amendments, labor reform, taxes, among others.