Monetary Organic Code Veto will be sent to Official Register 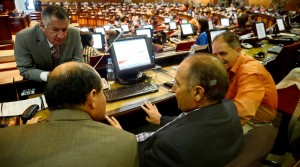 The plenary of the National Assembly processed yesterday the partial veto of the Executive to the Monetary and Financial Code. The assemblymen raided to 53 of the 56 observations submitted by the presidency. They also ratified three of the texts adopted by the legislature in July.

The raid took place with 94 votes in favor, 27 against and 2 abstentions of Assemblymen Antonio Posso and Ruth Loyola (Avanza).

For the ratification 95 votes in favor, 27 against and one abstention from Antonio Posso were obtained.

After that, the veto will be sent to the Official Register for its publication and entry into force, which could be up later this week.