Paquisha – a settlement that carries the name of a heroic military base that in 1981 fought against Peruvian forces. Yesterday after almost 18 hours of tension and confrontations of miners, farmers against police officers and military personnel. The fight left 7 wounded, six civilians and one policeman. This conflict started because of the disposition to evict a zone occupied by miners.

Almost 1.000 miners reject the presence of transnational companies such as Aurelian-Kinross and Ecuacorrientes. They maintained control over Paquisha from 8 P.M. Tuesday until 13:30 P.M. of yesterday and managed to stop the movement of police and military officers towards the mine sector of Congüime, to do this the miners made a ditch and placed stony material to hinder any attempt, they also took control of the access bridge.

As a counter measure over 2.000 police and military officers where deployed in Paquisha, Nangaritza and Zamora. The armed forces were equipped with anti-riot gear, tear gas canisters. The contingency used heavy machinery like trailers, anti-riot vehicles and even a helicopter.

During the dawn police and military officers arrived to the sector El Dorado at the bridge over the Nagaritza River near Paquisha. At 8 A.M. the first encounter began with tear gas canisters, stones and sticks, hostile activities lasted for 15 minutes. The officers took the bridge the aftermath of the fight left six wounded.

At 12:30 P.M. a heavy rain started for a period of 30 minutes, the officers took advantage of the weather to throw bombs and remove 200 miners and civilians that offered resistance. The town soon was taken over a gas cloud of tear gas on behalf of the police and military officers

The hostile encounters of the morning left 5 civilians wounded and one officer: Ramiro Peña and Victor Gualán had only minor injuries, while Angel Alvarez suffered a hematoma on his stomach and Vicente Chimbo was shoot by a stray bullet that tore his skin, Edgar Salinas Jumbo suffered broke his right leg tibia due to a bullet impact. The last two were immediately taken to the hospital in Zamora.

A blunt object scarred the face and took 4 teeth’s of the mouth of Danny Vicente Narvaez, a police corporal of 27 years.

During the second wave, Juan Francisco Ogoña Salinas, a miner of the Chinapintza sector suffered a serious bullet wound and was hurriedly transferred to the Zamora hospital. Meanwhile Lieutenant Coronel Luis Patricio Ramírez led the operative saying that their objective was to recuperate the mine sector of Congüime and that no police officer carried guns or was allowed to open fire.

Angel Calva, Mayor of Paquisha rejected the violent approach of the public force and said that the fighting occurred by the misinformation of the parties involved 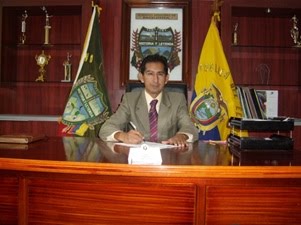 on the eviction process.

“We are talking about official representatives and they said the action was against the poor miners of Congüime and that it wasn’t going to involve the Chinapintza who also participated in the protest. There was a bad communication here and that caused the caos”, stated Calva.

In the afternoon Mayor Calva had a meeting with civic society representatives afterwards declared a state of emergency in Paquisha. Subsequently the government was exhorted to legalize immediately all the small miners settlements.

Clodomiro Tocto, Vicepresident of the small miners in Yantzaza, said that the order of eviction has been a subject of debate for more than ten months without any results. He criticized that these meetings had been for nothing.