More Gifts for the Miners 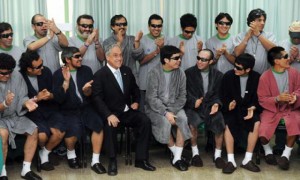 “All the country wants to welcome you all in La Moneda. So I’m here to invite you to La Moneda on October 25th, so we can welcome you the way you deserve,” said President Sebastian Piñera to the miners during his visit to the hospital yesterday.

The President didn’t think an invitation to the Presidential Palace (La Moneda) would be enough, so he also challenged the workers to a soccer match between ministers and miners “The winner team stays in La Moneda and the loser team goes back to the mine,” he said while everybody laughed.

The 33 miners couldn’t even brush their teeth before, now they’re receiving gifts and invitations.

They lived in darkness for 70 days, which is why they have to use dark glasses but ophthalmologists affirmed soon they’re not going to need wearing them.

The media attention they’re receiving it’s amazing, many journalists from all over the world want to interview them and they’re willing to pay any price the miners want. Miners want to create a foundation and share the earnings “The miners told authorities they wanted to create a foundation, and the 33 will cover the expenses.”

It’s almost impossible to believe that these men lived in a cave just a week ago. They have received invitations from soccer teams and mining companies, so they can enjoy their freedom and visit other countries.

They were offered a cruise to the Greek Islands; a mining company will pay for the trip. Edison Peña, a miner who is a fan of Elvis, will get a free trip to Graceland, Memphis to visit Presley’s mansion.

Gifts won’t stop coming, even Steve Jobs (Apple’s CEO) gave iPods to all the miners. An anonymous entrepreneur gave $10.000 each.

They also got t-shirts from national and international soccer teams. Chilean club Universidad de Chile gave to their miner fans (11) a lifetime membership so they don’t miss any game. Manchester United wants the miners to watch a game in England; Real Madrid also invited them to the stadium.

There’s even a game on the Internet where the player must rescue the miners.