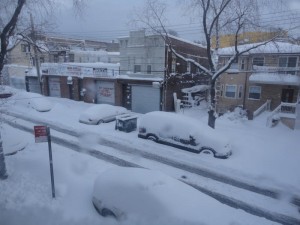 Today commuters up and down the East Coast of the United States began their day with the all-too-familiar task of digging out cars and shoveling sidewalks after a winter storm that lasted all night.

The storm, appearing as a giant white smudge over the Northeast on radar maps, seemed to land hardest in New York City and the surrounding area. Nineteen inches of heavy, wet snow fell on Central Park.
Airlines warned passengers that a change in their travel plans was possible in case they wanted to do it without the usual penalties in order to avoid the risk of delays or cancellations. American Airlines canceled at least 280 flights throughout the Northeast and estimated a minimum of 65 cancellations today.

The recent storms are the culmination of a season that has already been colder than normal. Snow in New York has already dropped four times out from the normal amount, said John Guiney, Chief of the east Division of the National Weather Service.

New York City schools and offices were closed, so there were Newark, Teterboro and John F. Kennedy airports. Commuter bus service was suspended throughout New Jersey, Long Island and most of New York City, as hobbled train systems struggled to absorb the overload.