More than 150 indigenous communities in the provinces of Sucumbíos, Napo and Orellana are still directly affected by the oil spill that occurred on April 7, according to environmental NGOs and local leaders. There are more than 27 thousand people with problems of access to food and water. 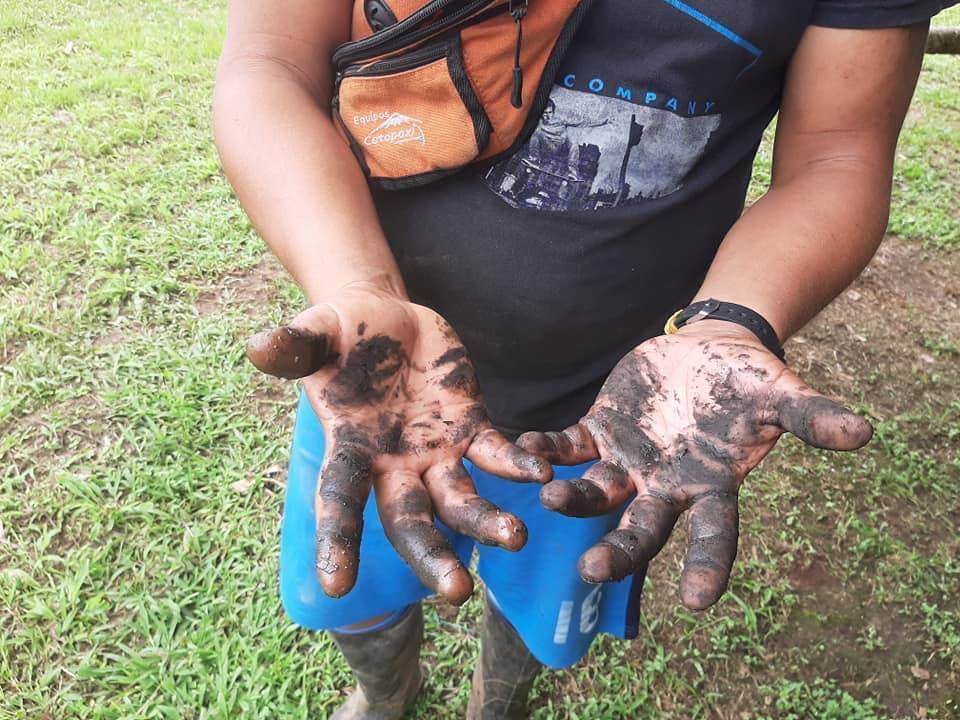 In the midst of the serious health crisis affecting the country, the members of these communities stayed at home, complying with the quarantine established, so they completely depended on the rivers to supply themselves with water since they cannot visit the nearby cities.

But the liquid that runs down the slopes became black and toxic from the spill that dispersed through the Amazon rivers Quijos, Napo and Coca.

A statement from the Confederation of Indigenous Nationalities of Ecuador (Conaie) states that the contamination originated when sections of the Trans-Ecuadorian Pipeline System (SOTE) and the Shushufindi pipeline were broken, both administered by the state-owned Petroecuador and the Crude Oil Pipeline (OCP) managed by private company.

The Conaie indicates that “it was an announced tragedy because it would be related to the collapse of the San Rafael waterfall (located on the border of the Napo and Sucumbíos provinces) on February 2.”

There are approximately 118,000 people affected (including those who suffer the consequences indirectly) from 22 parishes in the provinces of Napo, Orellana and Sucumbíos, according to Conaie.

The rupture was caused by sudden erosion in the San Rafael waterfall, the result of the sediment management project at the Coca Codo Sinclair hydroelectric dam , says the independent group of scientists and conservationists gathered under the name Todos Juntos por la Amazonia.

Scientists and experts from Amazon Frontlines had warned Ecuadorian authorities that erosion due to heavy rains was inevitable, however, no preventive measures were taken to protect the pipelines, they say.

The Minister of Energy, René Ortiz, declared last April 20 in the Assembly that more than 15,000 barrels were lost and dumped.

This would qualify it as the second largest in the last 15 years, say scientists who formed a network to send aid to those affected.

A crisis within another crisis

The Coca and Napo rivers feed the most pristine and biodiverse areas of Ecuador and the world. Manuel Coquinche, a community member from Martinique, on the border with Peru, comments that “even in remote areas, 200 km from the origin of the spill, they are today contaminated with oil.

Such is the case of the Pañacocha and Jatuncocha lagoons, the last refuges of the Amazonian manatee ( Trichechus inunguis ), in critical danger of extinction.

“The community is fine, there are no infected by Covid, but the needs are enough at the moment. So far, the government has not come up with information, just a small portion of food, ”said Katty Balladares from the Mandari Panga Community who lives on the banks of the Tiputini River, in the province of Orellana.

If the needs for clean water and healthy food, aggravated by the COVID-19 pandemic, are not met, the communities are at risk of disappearing, the group indicates.

To this is added that a large part of the affected communities live from ecotourism to maintain the conservation of the jungle, so the virus has annihilated this source of income and the spill increases the risk of these already vulnerable communities. “People do not have to eat, and now there is the risk of going back to hunting in areas where they had stopped eating,” says Coquinche.

State-owned Petroecuador and the company OCP indicated on social media that they are taking measures to clean up the affected areas.

The general manager of Petroecuador, Pablo Flores, assured in his virtual appearance at the Assembly held on April 20 that on April 7, the Emergency and Contingency plan for spill control that the public company has was activated. “The crisis committee met, pumping operations were halted, and control points were activated to place barriers and collect hydrocarbon at seven strategic sites.”

“A girl bathed in the Napo river a few days after the spill and left with welts and white spots,” says Klider Gualinga, local manager of Sani Lodge in the Kichwa Sani Isla community: “There is no way to bathe or drink water from the river for more than 10 days. Today, many families are without water and without the possibility of fishing for the crude that continues on the banks of the river. ”

The OCP company has reported that it has delivered 1500 feeding kits and more than 5oo 000 liters of drinking water. However, communities furthest from urban areas, such as the Peruvian border area, complain about the absence of humanitarian support measures. informs the collective.

The Napo river is one of those affected by the spill. Photo: Courtesy of the leaders of the Sani Isla community

“The authorities have not come this far. The Minister for the Environment should be here today, watching what’s going on, taking measurements, talking to us. But they only come when they want something from us, ”adds Alvarado.

The leaders indicate that there are cases of adults and children, living near the Coca River, with severe diarrhea and headache since the oil spill.

The communities report that they are not attended, neither by the oil company doctors nor by the health centers, the latter focused on caring for people with COVID-19. (I)

The distancing will continue for years

Impact of covid-19 in Ecuador: 1,521 doctors have been infected