More than 500,000 people attended the procession of Cristo del Consuelo 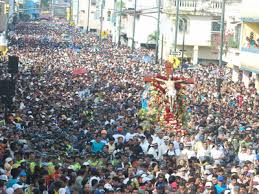 More than 500 thousand people, marched yesterday during the procession of Cristo del Consuelo for the 17 blocks of the Guayaquil suburb, as indicated in the amplified signal of radio Maria, the curia, which guided the religious event.

At the time that the float with the image turned into left, to take the street Azuay and leave Lizardo García, devotees rushed to her. Some wanted to touch it, others plucked flowers that adorned it and wore them as a relic.

The nearly 200 policemen, 1,050 who were involved in the operation of the procession, jostled the devotees; they were doing the same. They were all soaked by sweat and water that firefighters and charitable homeowners were throwing.

The five remaining blocks were as a battle to come with the intact image to the Church of the Holy Spirit. Men and women are taking off clothing and asked for caregivers that they rubbed it in the image. This year the procession had children, as a central motif.

And who would not walk were on the sidewalk, in the windows and balconies of the houses. From there they were throwing water at marchers.

At 11:10, the image reached its destination. There were the pastor Villamizar and Msgr. Arregui. The Soaked people applauded,screaming with happiness .