The president of Ecuador, Lenín Moreno, and the Secretary General of the OAS, Luis Almagro, will lead this Wednesday, October 30, 2019 in Quito a continental public security meeting with the participation of some ministers of the region. 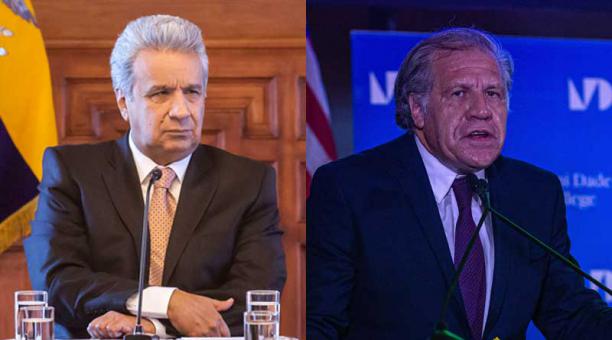 Moreno will open in the morning the VII Meeting of Ministers Responsible for Public Security of the Americas (MISPA VII), in which the participation of Almagro, the Ecuadorian Minister of Government (Interior), María Paula Romo, and ministers of the hemisphere.

In the two-day meeting, “the main challenges and advances in the Americas in terms of security” will be addressed, says a statement.

The meeting aims to “promote dialogue and exchange of experiences and good practices in the field of public security, strengthening ties between countries for the common good of the Americas.”

It will also address “citizen and community participation” and “international cooperation”.

“On this occasion, Ecuador considers it of special relevance to focus the discussions around the international cooperation pillar with the purpose of promoting the discussion and updating of coordinated public security strategies against the strategic challenge represented by transnational organized crime (DOT)” , underlines the official note.

Ecuador hosts MISPA VII two weeks after an unprecedented social wave of violence that shook the country at the beginning of the month, and that the government called an attempt to “coup d’etat.”

She has held external factors responsible, such as the former Ecuadorian president Rafael Correa, who lives in Belgium, and the Venezuelan government, despite the fact that the trigger was the elimination of gasoline subsidies.

The Government considers that “subversive groups” took advantage of social protests to encourage the wave of violence beyond the legitimate claims of unions and the indigenous movement, which led them, in order to terminate Moreno’s presidential term. .

After opening the international meeting, the Ecuadorian president will hold a working meeting with the Secretary General of the OAS, with whom he will discuss issues related to public security and Ecuador’s relationship with that organization.

Almagro, on the other hand, will offer a keynote speech in the afternoon at the Ministry of Foreign Affairs on “The future of democracies in the Americas.”

The region supports the destabilization thesis