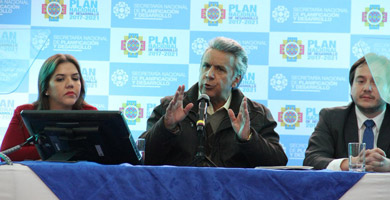 “There is no greater value than solidarity.” With solidarity, with dedication, with love, the “One Life Development Plan” has been drawn up, said President Lenin Moreno during the launch of the project, which plans to reach every corner of the country to “Listen to our people and fight against social inequities.”

He affirmed that “politics is the art of serving others and the desire to control everything is wrong”, in that sense he added that they designed the plan thinking about the welfare of the 17 million Ecuadorians. “We do not govern for an intimate circle, nor for those who think the same to us, we are the government of all,” he said.

On the other hand, he argued that everyone’s money should be used for the most urgent needs, handled with “extreme care” and not for “enriching corrupt people disguised as public officials.”

Finally, Lenin Moreno asked the Ecuadorians to get involved in the actions of the Government. “Only the active participation of all – without exception – will allow us to guarantee the success of this new challenge,” he concluded. (I)