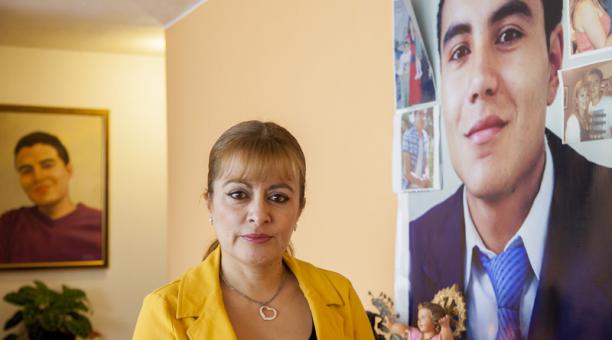 The mother of the young university student David Romo, who disappeared 5 years ago, asked today, May 13, 2018, the first lady Rocío González, her intercession so that justice is done with a case that can be filed.

“I am Alexandra Cordova, an Ecuadorian citizen, mother of David Romo Córdova, forcibly disappeared almost 5 years ago,” begins the open letter in which he claims not to have stopped “looking for him or thinking about him from the moment he disappeared”.

“They tell me that not only did he disappear, but they have murdered him, that they have cut him into pieces and that in order not to leave traces, his viscera have thrown them to the pigs to be eaten and that their remaining parts were incinerated”, affirms in the letter.

Romo’s mother continues appealing to President Lenin Moreno’s wife, saying: “You are a mother, and now, at this moment in your life, you represent all the mothers of the nation.” The letter comes to light today, second Sunday in May, Mother’s Day.

“I have been crying 1,821 days to the date I am writing this letter, almost 5 years because my son, my beloved David, does not appear, because my David has disappeared”, she reiterates.

Cordova assures that Justice “is days away from closing the case” of his son, and that “it has had a countless number of flaws and errors in his investigation and process”. “Mrs. Rocío González Navas, I greet you fraternally as a mother and I hope that in your capacity as a mother you will help me to replicate my request: I want justice for David”, abounds the mother.

“I need to hug him if he’s alive and if he’s dead too, to be able to give him a dignified goodbye, with his soul shattered, but with the certainty of knowing that he rests in peace,” she concludes.

Last Friday the trial preparatory hearing was suspended against four defendants related to the disappearance of David Romo for not presenting his lawyers before the court.

The lawyers of the family of the disappeared considered that it is a strategy to prevent the continuation of the process.

In April, the prosecution filed a writ of indictment against the presumed involved in the case, and the trial preparatory hearing is scheduled to resume on Monday.

Cordova has repeatedly reported irregularities in the process of investigating the disappearance of her son and that she was not provided with relevant information about the case. (I)

Richard Carapaz climbs to sixth place in the standings