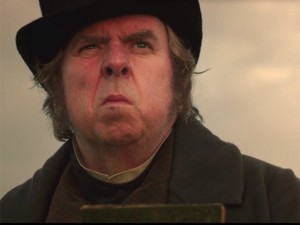 Yesterday (15 May 2014) the official competition of the Cannes Palme d’Or, with the film ‘Mr.Turner’ director Mike Leigh began.

With a great reception from the press both the director and the actor Timothy Spall, have released the comprehensive process to embody one of the most famous painters.

The film focuses on the last 25 years of life of JW Turner. At that time the English painter ran both fame and decadence.

His romantic and expressionist landscapes showed their detailed study on the effects of light and color in the atmospheres.

This information has been useful to cinematographer, Dick Pope, who used the color palette for the image Turner movie.

Spall  defines Turner as a mysterious man while for Leigh was a radical and revolutionary.

Both managed to portray the artist in a complex way, which for some is a completely fictionalized approach to the painter, while for others it is a film that tries to be responsible with the accuracy of Turner’s life.