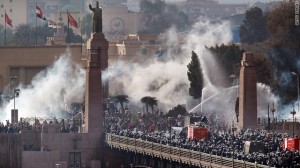 Journalists are running through the streets of Cairo while escaping from those that defend the president of Egypt, Hosni Mubarak. According to the civilians their crime is that they show the world a vision that does not represent what is really happening.

The peaceful demonstration took a different turn when they faced Mubarak supporters. Now the protests raised the tone of their manifestations and will not move from the Liberation Square. The journalists received comments like, “liars! liars! We do want Mubarak.”

Anderson Cooper, a journalist of CNN International explained through a video on his website that they can’t take any pictures because angry mobs attack them as soon as they see the cameras. Cooper alerted all the reporters on Cairo to be prepared.

Serge Sumont a Belgium journalist from the newspaper Le Soir, was taken while taking pictures of the confrontations between the supporters of Murabak and the opposition. The Vice Prime Minister of Exterior, Steven Vanackere, made a communication demanding the release of the journalist. Robert Gibbs, spokesman of the White House, asks for the country calmness.

Al Yazira informed that the number of injured in Cairo is of 1,500, the ministry of Health revealed that three people have died, through the network Al Arabiya.