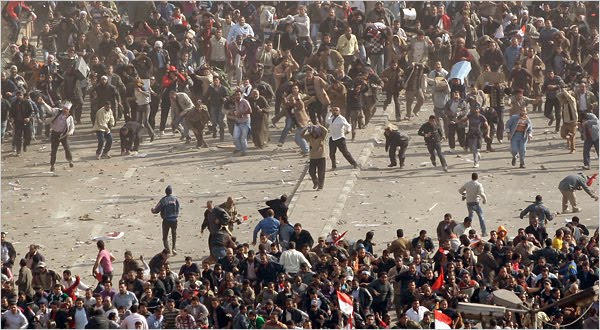 It has been 12 days since the protesters of Egyptian society, launched demonstrations to end the government of Hosni Mubarak, who has been reluctant to resign, however, the news that Egyptian state television channel reported this evening represent the first step towards Mubarak’s departure since the top leaders of the ruling National Democratic Party have resigned in block. However, Mubarak has not submitted his resignation as party leader.

The resignation of Gamal Mubarak, son of the Egyptian President, ensures the end of the Mubarak era in Egypt’s political future, because he was supposed to replace his father as president. Constitution requires that candidates must belong to a political party.

The departure of Mubarak’s son was taken positively by the U.S. government, Frank Eisner, Barack Obama’s deputy in Egypt, said that “now there is a chance to advance, it’s in the first phase but the direction is promising. “

During the riots in the Liberation Square in central Cairo, at least 11 dead and 5,000 wounded have been reported, but opponents of the regime will not give up. Despite Mubarak clings to power, demonstrators continue to expect the president’s resignation.

The mass resignation of Mubarak’s party did not please the Egyptian people “This is a ploy of the regime that does not satisfy our demands,” said Bilal Fathi, a member of the anti Mubarak movement.

Yesterday, the opposition made a call named “Farewell Day” which mobilized hundreds of people to the center of Cairo and Alexandria. Some of the protesters became violent, and chose to rename the meeting to “Loyalty Day.”

Smart Meters are Being Installed in Guayaquil

Hacktivists Have Their Eye on Yemen and Egypt