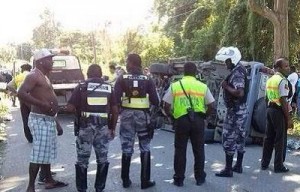 The elected Mayor of Muisne , Walquer Vera Guerrero, 42, who was three of taking office, was murdered yesterday in the south of Esmeraldas.

Vera, a member of Alianza PAÍS ( AP ) and native of the canton Chone, was shot once near 08:00 when driving down the road to the parish Vuelta Larga.

Last Friday, he received the credential of the National Electoral Council (CNE ), which recognized him as the head of the Municipality for the period 2014-2019 , replacing Paul Velez. A day earlier, the late Mayor received death threats, according to a publication of The Daily El Telégrafo.

Unofficial sources reported that Vera was hit by six shots. Furthermore, it was reported that in an attempt to escape the attack, he accelerated his car – a gray Toyota Prado- , lost control and crashed against a taxi that was driving in the opposite direction.

The body was taken to the cemetery morgue around 10:00, but then was mobilized to the Research Centre of Forensic Sciences in Santo Domingo de los Tsáchilas, where an autopsy was performed.

The Minister of Domestic Affairs, José Serrano, announced yesterday afternoon that two people were detained, but declined to identify them or specify their background.