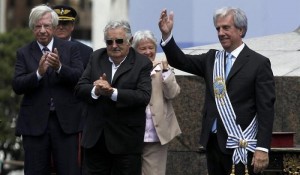 On March 1st, Tabaré Vázquez took over the presidency of Uruguay with the challenge of maintaining the economic growth and bring marijuana to pharmacies, government policies of his predecessor José Mujica.

International media have claimed that Vázquez task will not be easy, because he will replace who has been surely the world’s most famous Uruguayan president: “Pepe” Mujica, who generated enormous international interest for his simple style and not prone to protocol.

During his speech, Vázquez mostly remembered the thinking of the national hero José Artigas, and promised that values ​​such as equality, freedom and tolerance “will be references” of his government.

“Today life gives me a second chance,” he said at the opening of his speech following his oath. Leading the progressive coalition Frente Amplio (FA) party, Vazquez was president of Uruguay in 2005 for five years and in March 2010 Mujica, a member of the same coalition of mostly leftist sectors, succeeded him.

The executive ability of this oncologist, businessman and Mason was demonstrated a few days after winning the second round to Luis Lacalle Pou (of the center-right) -with 53.6%- of the vote by announcing his cabinet without consulting Mujica or respecting political quotas.