It has wheels, an engine and reaches up to 30 kilometers per hour, however, no license or registration is needed to drive it.

Scooters and electric bicycles have increased their presence in the streets of Quito in recent months. 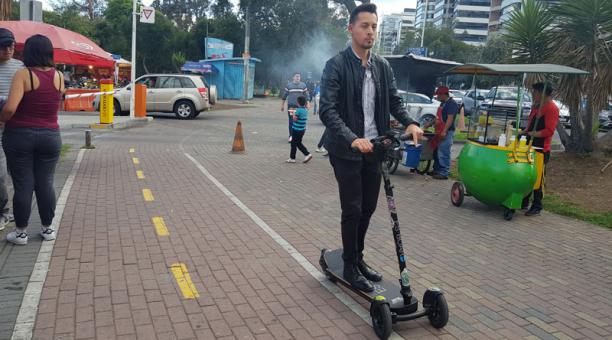 One of the main reasons is that they do not govern the Today does not circulate. That is, they can roll freely without restriction.

In the premises where they sell these types of vehicles, they ensure that the number of customers has increased.

In Electrobike, one of the largest stores offering these devices, demand increased by 15%, according to Andrés Mesías, director of the company. For Messiah, one of the advantages is that scooters and electric bicycles work without the need for fossil fuels and provide autonomy to move around the city.

The most interested in these alternatives are university students and young executives.

The price of these vehicles varies depending on their characteristics; however, they can be found from USD 500.

The model that has more demand is the three-wheel scooter, for its stability, power and affordable cost. This is sold at USD 580. For Álvaro Mayorga, owner of Citycoco, another company that sells scooters, the vehicle restriction measure in the city has had a positive influence on its sales. On average, prices in this company range between USD 1,250 and 4,000.

Due to the acceptance of this product, every three months approximately a new import arrives from China.

The Chamber of Commerce of Quito indicated that between January and August an import of bicycles and electric scooters was made for USD 360,000, 21% more than what was imported in the same period of 2018.

Using a scooter to mobilize has benefits, but also risks. Andrés López, 23, is a bicycle lover.

However, when he got a job at an architecture office, he began to notice that getting around by bike was exhausting and sweat became a problem. An electric bicycle costs USD 1,300 on average, so three months ago he chose to buy a three-wheel scooter, at USD 600.

It is electric, reaches 30km / h and climbs slopes without problem. To charge it, you must connect it to an outlet as if it were a cell phone. With four hours of charging you can travel between 15 and 25 km.

If you run out of battery, roll with the impulse of your foot. For Andrés, it is an excellent alternative, although he admits several problems. The most serious is safety: cars don’t respect it.

Víctor Almachi coincides with him, who also mobilizes in that environment. He says that the crossings are unsafe, the car is thrown and there are not enough bike paths, so in some sections you must drive along the street.

Diego Hurtado, mobility expert, warns that such vehicles should only use the bike lanes, but in the case of Quito there are not enough and they are not interconnected.

In the city there are 46 km of exclusive bike paths, but most are concentrated in the La Mariscal sector, between the Colon and the Homeland.

In the south are June 5 and Lieutenant Ortiz, and in the north, the extension of Simón Bolívar. In the absence of roads and the risk of going on the road there are those who use the paths, but this puts the pedestrian at risk.

The problem – says Hurtado – is that both scooters and bicycles are seen as recreational devices, but being a means of transport must be regulated, which does not happen.

Neither national nor local regulations contemplate them. Guillermo Abad, Secretary of Mobility, points out that these vehicles, despite not being combustion, are electric and must be within a legal and regulatory norm, and must be legislated by the Traffic Law.

To initiate control, the Mobility Secretariat is working on a contest to have a consultancy and establish the respective regulations based on international parameters, and thus include it in a local regulation.

“They are not a toy, they are a motor vehicle, so we have to work on a regulation and look for the technical sheet of these vehicles to see how they are considered,” said Abad.

Especially since they can generate high accident rates, as has already happened in Paris, Barcelona, ​​Madrid and Bogotá.

In this last city, for example, there is a regulation that indicates that this type of vehicles must not exceed 20 km / h, must go on the bike lanes, the driver must wear a helmet and reflective garments at night, they cannot go on platforms No avenues

The driver must not manipulate mobile devices while driving or have drunk or carry a passenger. Without that regulation, Hurtado warns, its circulation will be disorderly and risky.