The quarantine by the covid-19 in the country caused changes in the way of acting of the mafias dedicated to drug trafficking . 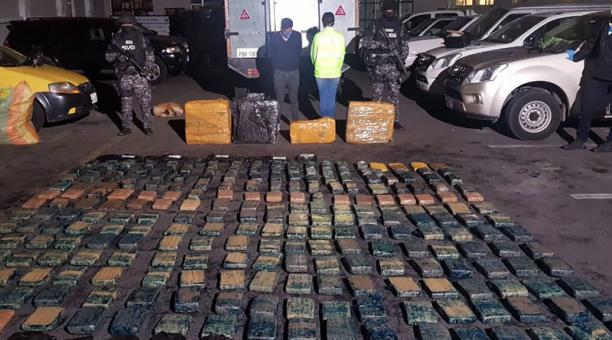 Agents tracking this crime acknowledge that restrictions on the mobility and deployment of police and military personnel on the streets generated four new ways of operating.

One of these is to use trucks that have the façade and logos of companies that distribute food or cleaning products , to transport large amounts of narcotics . The substances are hidden in boxes or bags.

For example, the Police carried out an operation on Monday in the Antisana sector , in Píntag . There they intercepted a truck . The driver showed a safe-conduct and assured that he is in charge of distributing fruits and vegetables . When the uniforms checked the cargo inside potato bags they found 538 packages with marijuana . The man was arrested.

Antinarcotics data show that 313 operations have been carried out during the health crisis . In addition, 419 people have been arrested and 3.7 tons of drugs have been seized in the country. The provinces with the highest number of criminal acts are: Guayas, Pichincha, Manabí, Esmeraldas and Los Ríos.

In Calderón , in the north of Quito, two suspects were arrested on Tuesday, May 5, who were moving in a van with the logo of a hygiene and disinfection products company . However, 960 grams of cocaine were transported in boxes in brick- type packages . The gendarmes also found four cell phones and $ 592 in cash. According to them, this narcotic was destined for three neighborhoods in the capital.

The researchers know of a second modality : the gangs use cars with different plates every day to transport the drug and thus avoid vehicle controls on the roads. The illegal substance is hidden in compartments or in double bottoms of the bodywork . “Narco-criminal organizations have been adapted to the current circumstances by covid-19,” said a police chief.

Yesterday, in Esmeraldas, agents stopped a jeep vehicle in which two citizens were traveling . In a double bottom, near the trunk, they discovered 4.8 kilos of marijuana.

The investigations show that change daily car serves to confuse and occurs when the moves narcotic between provinces .

From March 16 to April 26, the Prosecutor’s Office prosecuted 332 people in the country for that crime . The Penal Code (art. 220) establishes a prison sentence of two months to 13 years.

Two other people are also facing a criminal investigation after they were captured by uniforms on March 31 . Both were driving in a van on an Ambato street, while the curfew was imposed to prevent the spread of the virus. In their possession they had 30.48 grams of cocaine hidden in a seat . Also, they had $ 649 in cash.

In Guaranda , Bolívar, four defendants were sentenced to 20 months in prison , after they accepted that they sold 213 g of cocaine.

According to the Police , a third way to operate is to deliver the narcotic at home . The buyers order the substance and the dealers go on motorcycles to deliver the product. The drug is hidden in a case or backpack .

In an operation in Quito, executed on April 21, two people were apprehended and 10.2 kilos of marijuana were seized. The agents discovered an organization that had as its operations center a house located in Carapungo , a neighborhood in the north of the capital. The gang was in charge of the transfer, storage and subsequent distribution of alkaloids through motorcycles that provided food delivery services.

A fourth mechanism used by gangs to market the drug is known as “dead mail.” The uniformed officers explain that this consists of leaving the illegal merchandise in areas of the city previously agreed between the buyer and the vendor. For example, they put it in a park, a sidewalk or on the corner of a street. Then the consumer comes to collect the narcotic. Payment is made by electronic transfer.

State budget with reduction in the face of the pandemic