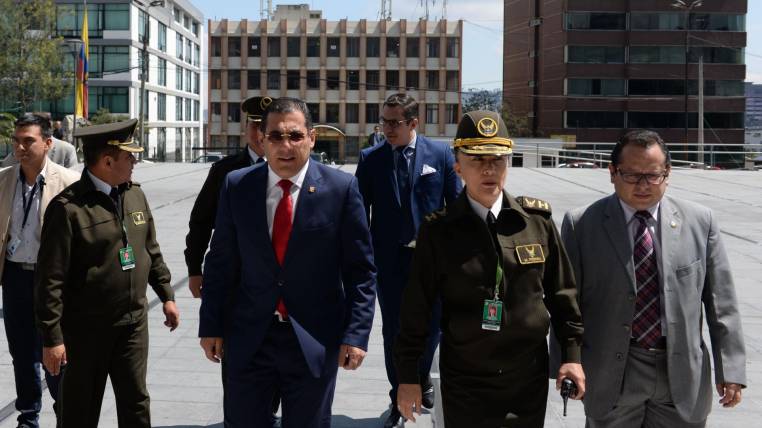 The peace process in Colombia brings insecurity to Ecuador. The partial demobilization of the Revolutionary Armed Forces of Colombia (FARC) puts the “northern border” with the dissidents of the irregular armed groups that “protect” gangs dedicated to illegal activities such as drug trafficking.

The country’s security agencies, the National Intelligence Secretariat (Senain), the Ministry of Defense and the Ministry of the Interior knew about this possibility. However, this reality was ignored, say assembly members who believe there is a lack of communication between the police and military intelligence corps.

Which it was the result? The attack with a car bomb in the outskirts of the police station in the town of San Lorenzo, in Esmeraldas, the early morning of January 27, they maintain.

For the legislators, what is happening on the border with Colombia is worrisome, and they believe that “Ecuador is at risk”. This coincides with the assembly members of CREO and members of the International Affairs Committee, Fabricio Villamar and Fernando Flores; of the Democratic Left, René Yandún and César Carrión. The organism received between Tuesdayand Wednesday the explanations of the holder of the Senain, Rommy Vallejo; and of the ministers César Navas, of the Interior, and Patricio Zambrano, of Defense.

The parliamentarians see with concern what happened. However, their views and comments go against the actions of the Senain. They claim not to be satisfied with the information reserved by Rommy Vallejo.

“The secretary of the Senain asked that the session be reserved. However, it did not contribute anything, since it delivered information that we already knew from the media, “Fernando Flores told EXPRESO.

The Interior Minister, César Navas, showed his disagreement with these assertions. After clarifying that there is no risk to the country, he assured that the intelligence work is good and that no one could be prepared for something like what happened in San Lorenzo.

He said that next Wednesday in Pereira, Colombia, they will meet with their Colombian counterparts to talk about the need for joint work to protect the borders. In this regard, President Lenin Moreno will ask his partner “co-responsibility (in the protection of the border), because it cannot be that the problem originates there and we are the ones who have to pay for the broken dishes.

“Meanwhile, from the International Affairs Commission is preparing an approach to be addressed in the House, to reject these events, because it put at risk the lives of Ecuadorian citizens. Voices Fabricio Villamar, assembly member of CREO Ecuador is at risk. The bombing puts us in another scenario, this was not fortuitous or chance, it is another moment on which the security system of the country has to react.

Fernando Flores, assembly member of CREO Of course, Ecuador is at risk. We knew it since the peace processes in Colombia began because not all the people would agree and they would generate these criminal groups. César Navas, Minister of the Interior Police and Armed Forces are going to make a frontal fight to these organized groups, armed, that are many dissidents of the FARC and that now are dedicated to the narco crime. (I)

The ghost of the contested rulings returns to pursue Ochoa