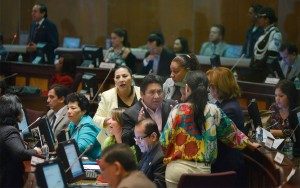 The Assembly approved yesterday the draft Organic Law for the Promotion of Youth Work, Regulation Exceptional Day of Work, and Unemployment Insurance, which provides the State some resources to cover the employment of youth between 18 to 26 years of age and the unemployment insurance starting this year.

According to Fausto Cayambe (AP), a member of the Committee of Workers, the employer for youth employment contribution will represent the state about 70 million dollars for about 65,000 young people, between 30 and 40 million dollars for coverage insurance for more than 58 thousand people who have been in unemployment this year.

The sum of the two numbers thrown about 110 million dollars will come out of the General Budget. (I)