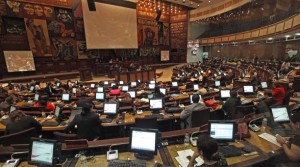 The resolution of condemnation and rejection of violent acts produced in the country, including a “soft coup” was approved with 84 votes in favor, 34 against and three abstentions.

The document removed the adjectives addressed to the protesters and the opposition, the same that was discussed among critics and even insults from both sides.

Independent Assemblyman Ramiro Aguilar said: “The original text of the resolution condemns any act because it is illegal, unjust and perverse. The good thing is to support the president of the republic.” Likewise, he requested the evidence that shows a coup.

Fausto Cayambe, Assemblyman of Alianza Pais, defended the bill and noted that the priority of the citizens’ revolution is to eradicate poverty in the country. “We reject violence and believe that dialogue is the only means to resolve conflicts and achieve development and good living,” he said.