The involuntary disappearance is a new crime that is incorporated for the first time in the Comprehensive Criminal Code (COIP). 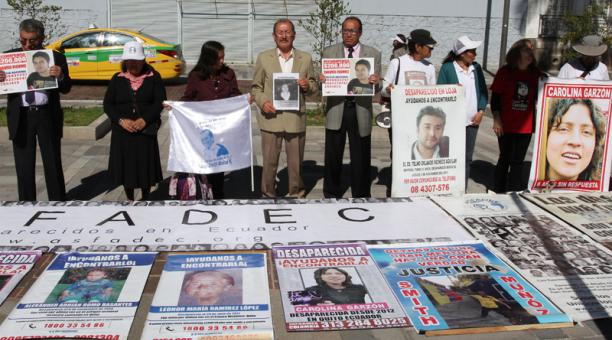 The sanctions range from seven to 13 years in jail for those who “deprive of liberty, retain, seize, disappear, move to a place other than one or more people, against their will and deny information of their whereabouts or destination,” he says. the rule.

If the death of the victim occurs as a result of the disappearance, the penalty increases from 22 to 26 years in prison. For the Assembly, the criminalization of this crime responds to the demands of families “before a justice system that does not respond with opportunity and effectiveness.”

In the debate, the relatives denounced that the cases of missing persons were investigated as administrative acts and not as criminal offenses. This situation influenced, for example, the collection of data, since being an administrative act limited investigative procedures such as interception or listening, surveillance and monitoring.

In fact, prosecutors also could not consider someone officially suspicious and direct actions against them, due to the lack of classification. The Executive vetoed this article, as he pointed out that the text is similar to kidnapping. But the Assembly rejected that view.

Meet several of the milestones reached as a country in 2019