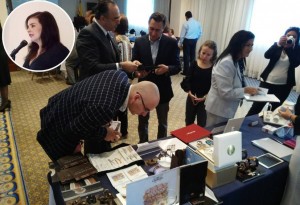 On Tuesday, about 40 national jewelers gathered in a hotel in Guayaquil with spokesmen of the Panama Diamond Exchange (PDE), a private entity composed by manufacturers, exporters, importers and representatives of different jewelry firms.

The company was created in April in Panama City, where its headquarters operate, “this building is a free zone where stakeholders (members of the PDE) can buy and sell jewelry without paying taxes,” said Judy Meana, PDE vice president, who also said this is the first of this kind in Latin America, where they move about $ 8 billion a year on jewelry business.

PDE is part of the World Diamond Exchange, which brings together 30 other exchanges in the world. To create it $ 200 million were invested, which includes the construction of a second building in Panama and the physical representation in several countries of America, including Ecuador, where it is analyzed to appoint an ambassador, said the vice president of the union.

This proposal submitted by the PDE and the proximity of Panama for business, besides the fact of failure to pay taxes is convenient for jewelers.

Gerardo Larrea, another businessman of Guayaquil, said it is currently very difficult to get gold in the country so it must be bought on the streets with many risks. He said that the Central Bank of Ecuador used to sell gold, but this no longer happens.

German Lopez, manager of Gold Ecuador (Oreco), said that the national jewelery industry is weakened by crime and lack of raw materials, so this proposal seems interesting.

Meana said that in order to be a member of the PDE (buy and sell jewelery) $ 1,200 annually must be paid, and to be an affiliate (just buy) the payment per year is $ 240.