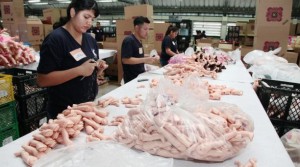 Assembly area of dolls and boxes in the PICA plastics and toys plant.

The Christmas spirit is on and with it, the factories begin to hire more staff and accelerate their machines to deliver thousands of toys, as every year, line the hangers of stores as Mi Juguetería (My Toy Store in Spanish) of El Rosado Corporation, Juguetón (Playful by its Spanish name) of La Favorita Corporation, Tia stores, Estuardo Sanchez, Pica, Fybeca, among other clients.

Mario Echeverria, commercial manager of Plásticos Chempro in Guayaquil, indicated that his sales grew by a 60% this year, by the agreement signed in January between the government and toy stores to replace 25% of its imports by the local product.

While Pica, increased its production of 600 thousand units in 2013 to 774,000 this year, in addition, it invested nearly $ 1 million to supply the market and four new suppliers were obtained at the trade fair, as reported by Maria Paula Escobar, manager of the toys division.

Small toymakers also show their ascent. Elizabeth Pinos, commercial manager of the company Jepime, Quito, reported a growth of 5%. By 2015 she plans to launch a line of baby toys.

Augusto Cervantes, Ecuatoys, mentioned that his client base grew a 20% and as a result they got a rise on their sales of 40% thanks to the firm managed to enter Mi Juguetería, Juguetón and Tia stores.

The Undersecretary of Intermediate Industries, Diego Egas, said last Friday that from August 2013 to August of this year they managed to replace 30 million in toys imports. As for 2014 global data he indicated they must await the completion of the fiscal year in January 2015.

Supermarkets must publish prices on their websites