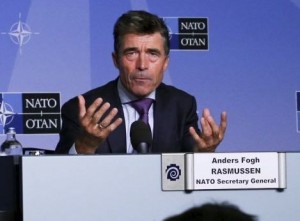 The Atlantic Alliance has accelerated its plans to create a rapid reaction force composed of “several thousand” soldiers, dropdown in a few hours, reported the General Secretary of the organization, Anders Fogh Rasmussen.

Rasmussen justified the creation of this force to increase the Allied presence in Eastern Europe, where movements of the Russian militia are produced, which have been intervening in Ukraine.

“We do not it because we want to attack somebody, but the dangers and threats are more visible. And we will do whatever it takes to defend our allies, “the official said in a press conference.

The unit shall include land, naval, air and special forces which will have a headquarters in one of the 28 allied countries to act if necessary, explained sources of the organization.

NATO will hold a summit meeting in Wales on Thursday, where President of Ukraine, Petro Poroshenko, is expected to attend, and it will be addressed how to increase investments in the area of ​​defense against the escalation of the crisis in Ukraine.