Long lines of users were registered in the first weekend of opening of the Naturíssimo store that recently opened in Doral, Miami. 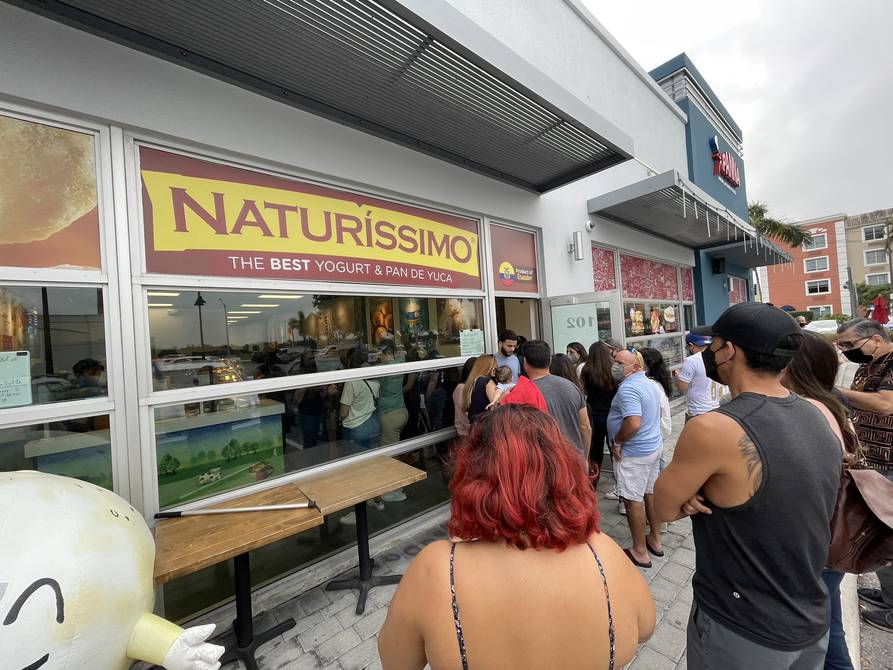 Users waiting to enter the Naturíssimo store in Miami.

In the two days of opening of the premises, as reported by the company, more than 3,000 customers were received, which exceeded all expectations at its start.

The inauguration of the premises in the North American country was on January 21 with the presence of company officials, authorities and special guests.

“We are happy to fulfill this dream, to cross the borders and arrive in Miami, where a large part of Ecuadorians will be able to revive the family tradition of eating yogurt and cassava bread. Now they will be our great ambassadors to transfer this custom to the Latinos and North Americans who live in this city”, said Keyla Rivadeneira de Dalmau, founder and president of Degeremcia.

During the event, the brand received three recognitions. The first, granted by Digna Cabral, deputy mayor of Doral-Florida, who welcomed Nutry-Foods, the operating company of Naturíssimo in the United States.

The second recognition was given by Ricardo Arosemena, president of the Ecuadorian-American Chamber of Commerce of Miami (Ecua-Chamber), in evocation of the trajectory, the promotion of the national workforce and for being the only Ecuadorian food chain with operations in Miami. The third was granted by Christian Cevallos, councilman of the 11th district of Miami Dade, welcoming the county.

The opening of the new location in Miami, which is number 77 of the firm, represents an investment of $1.5 million for the company.

“Being in Miami is the beginning of great plans that we have with Naturíssimo to take our brand to the world. We are sure that the Ecuadorian tradition of eating yogurt and cassava bread will also be a new habit that families will adopt, because our products adapt to all tastes”, said Jaime Dalmau, general manager of Degeremcia .

Through a statement, Naturíssimo expressed its gratitude for the support during the first weekend of operation of the business in the United States. “It fills us with pride to be that reunion of consumers with their country.”

The company also explained that “due to the extraordinary demand, which exceeded its expectations”, the operating team and shareholders continue to work to stock up on products and speed up the service.

In fact, due to the massive influx of users, videos and images of Naturíssimo ‘s first days of operation were posted on different Twitter accounts. Some videos reflect the lines of customers waiting to enter the establishment or the photo of their first customer.

In the United States, the brand’s catalog includes 100% natural products that are already marketed in the country, such as corn, green, and cassava tortillas; the corn gorditas; baked pies; lotines and minicorn dogs. In addition, it includes in its portfolio the yucaninis, which are yucca waffles with different fillings.

On the fruit drinks side, they bring to the North American country their versions of joogy , frusty and their offer of fat-free, lactose-free yogurts and almond drinks. In addition, Rico Suave Coffee, by Ecuadorian artist Gerardo Mejía, will be sold. (I)