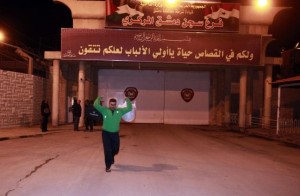 Nearly 2,000 people died in 10 months in prisons and detention centers of Syrian intelligence services, where more than 200,000 prisoners are crammed, an NGO affirmed on Sunday.

According to the Syrian Observatory of Human Rights (OSDH), between January 1 and October 31, 2014, 1,917 people died in the cells of the regime, including 11 women and 27 children under 18.

The NGOs precise that the deaths were caused by deplorable conditions of detention and torture practiced systematically by authorities in Syria. In 2013, 2,389 prisoners were killed.

According to the OSDH, the Rif, province of Damascus (rural areas around the capital), is the one that holds the deaths record with 411, ahead of the central province of Homs (299), the southern Deraa (271) and Damascus (243). These are the provinces where the rebellion is well established.

Burkina Faso army promises to give way to civilian government