Nebot considers to raise a referendum for the transit jurisdiction 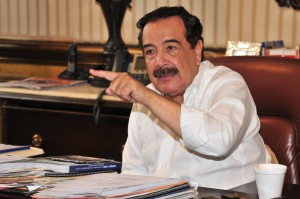 The Mayor of Guayaquil and the Guayas Governor, Rolando Panchana, had another disagreement. This time the dispute was about the powers of transit.

Nebot announced that next week, he will discuss with social agencies to define the call for a referendum for Guayaquil. The question would be, he said: “Do you agree to have less work and services, so that money goes to transportation companies?.”

On this, Panchana said that the Organic Law of Citizen Participation prevents the Mayor promoting a petition on public spending or competencies. “(Nebot) can not consult on the competence or the subsidy, because it is public spending,”said the Governor.

The Mayor said that the government should provide $ 44 million to the City Council for the transit jurisdiction, but it has only delivered $ 30 million. Because of that, he said he has not assumed such attribution.