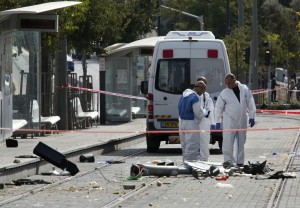 An Israeli policeman was killed and several people were injured this Wednesday after being run over by a car driven by a Palestinian, killed after by members of the security forces in Jerusalem, where there is a very heated and tense atmosphere due to confrontations in the Esplanade of the mosques.

The attack left at least nine people injured, two of them seriously wounded and a deceased border police officer.

Israeli police identified the attacker as a 38 year old Palestinian resident of the Shuafat neighborhood in East Jerusalem, near the site of the attack.

According to the police, the attacker rammed into a group of people waiting at a tram stop, and immediately got out  a crowbar and began to lash out with a it.

The past October another very similar attack occurred in Jerusalem, in which two people, a baby and Ecuadorian Karen Mosquera died.