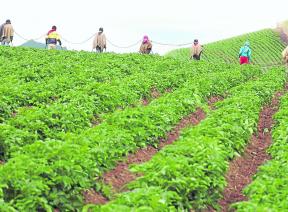 The latest draft Land Law, called “draft No. 1”, dated September 18 and delivered to the members of the Commission on Food Sovereignty on this Tuesday 23 September, the  titled the project as ‘Organic Law on Rural Land’ and includes the “territories” in various parts of the articles.

Within the purpose of the law is setting the recognition and legalization of lands and territories of communes, communities, and indigenous nationalities, Afro-Ecuadorian and peasant nationalities, in accordance with the Constitution and international instruments.

The articulated also includes the creation of the National Land Fund, the National Register of Rural Land, it creates the Family Production Unit (its extension is within the discretion of National Land Authority), prohibiting the latifundiums (large estates) and discouraging little latifundiums. It also talks about the redistribution of rural land.

Furthermore, it defines the conditions under which it is considered that rural lands meet in the social and environmental function.

ENES tests will be taken on Saturday, September 27