New ministers of Culture and Telecommunications were appointed 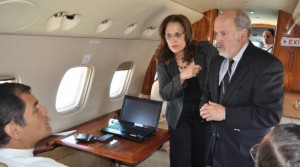 On Monday the new ministers of Culture and Heritage and Telecommunication and Society Information were appointed. Francisco Borja Cevallos and Augusto Espín Tobar will be in these positions, respectively.

Last week, President Rafael Correa also hinted that there will be more changes among his group of partners.

No details on the inauguration date of the new officers are known yet.