Last Thursday during the first general committee organized by the Committee on Economic System, the central bank president, Diego Martinez, said the Monetary Financial Code -sent last Wednesday to the National Assembly as urgent in economical matter- “maintains the dollarization.” “The code does not take us out from dollarization,” he said.

Martinez explained that the people will still be able to carry out transactions normally, although with different kinds of dollars: green bills, coins (Ecuadorian dollars) and electronic currency. Martinez said that electronic money may be exchanged for physical dollars at any time.

He also insisted that the Code provides that in any case the State may force a natural or legal person to receive currency other than the U.S. dollar “Nobody will be paid by the State in anything other than dollars,” he said.

Meanwhile Assemblyman Ramiro Aguilar (independent) called the government as irresponsible for having sent draft law, which is complex and bulky -516 items-, as an urgent manner. The legislator warned that it will be very difficult to examine the draft with depth in 10 days, which is the deadline for the Commission on Economic System to address the issue. 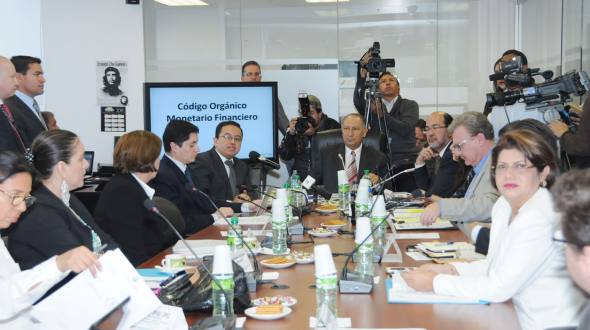 Pozo proposes use of social networks to spread election issues