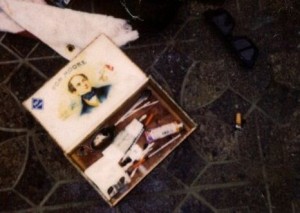 in this picture a box of cigarettes, several needles and a spoon can be seen

After twenty years of the death of Kurt Cobain, leader of the grunge rock group Nirvana, the Seattle Police Department has revealed new images of the scene.

Detective Mike Ciesynski said in a statement that when reviewing the material, four rolls that had not yet been revealed were discovered.

`We knew the 20th anniversary of his death was just around the corner and it would have a great media interest,´ said Ciesynski. However, The Police claims that Cobain’s death was a suicide, and that he had injected heroin before firing with a shotgun, thus, any speculation about the murder of the 27 years old artist, is out.