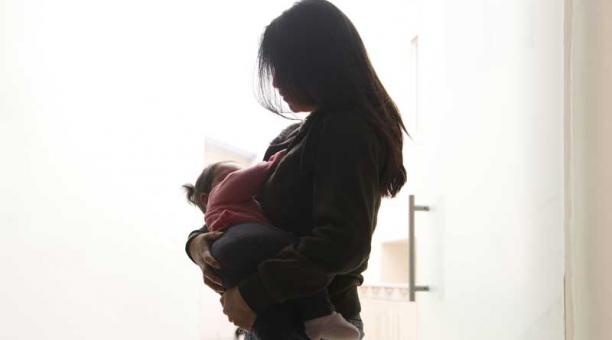 Her belly began to grow for five months. Sarah, fictitious name, is from Quito, 16 years old. At her young age, she will become a mother for the second time. Last Thursday she went to the Integral Service of Adolescents of the Maternity Isidro Ayora, of Quito.

She is one of the 40 girls who arrive daily at that specialized department, to access gynecology, pediatrics, psychology, social work and dental health services. In the corridors of waiting there is a coming and going of mothers, with the face and body of girls.

They also wait, silent students who became pregnant. Some go to the consultations with the uniforms of their schools. In 2017, of every one hundred women who gave birth in that public gynecological obstetric hospital, 35 were adolescents. These figures are not isolated. In the evaluation of the National Plan of Good Living 2013-2017 an increase in the rate of live births of adolescent mothers, between 15 and 19 years was evidenced.

This increase was due to the implementation of the Family Plan, in 2014. Nicolás Reyes, Technical Secretary of the National Council for Generational Equality, says this. Reyes recalled that in that year the National Intersectoral Family Planning Strategy (Enipla) was replaced and a prevention approach “more ideological and based on religious criteria” was adopted.

On a daily basis, 142 young people in that age range bring children to the world. The adolescent pregnancy rate in Latin America and the Caribbean is 66.5 births per 1,000 girls aged 15 to 19, according to PAHO. In Decree number 4, of May 24, 2017, President Lenin Moreno suppressed the Family Plan.

That, for Carlos Durán, vice minister of Health, left a clear message, in that the Government understands the need to rethink strategies to combat adolescent pregnancy. We respect, he says, the Constitution, which speaks of a secular state. Therefore, “intersectoral public policy strategies must be based on scientific evidence”. On May 11, in Esmeraldas, the Social Intersectoral Council approved the implementation of a new policy for the prevention of teen pregnancy.

It is the replacement of the Family Plan. The goal, until 2021, is to reduce the specific rate of live births in adolescents from 80.31 to 63.5 per thousand. The Intersectoral Strategy against Adolescent Pregnancy will articulate the ministries of Health, Social Economic Inclusion and Education, the State Attorney General’s Office and the Council of the Judiciary.

On the budget that will be invested, Deputy Minister Durán said that they are still calculating. The reference is what was spent between 2012 and 2014 with Enipla: around USD 11 million. Although there was not contemplated the component of reduction of sexual violence, which this new strategy does bring.

The objective of the plan -according to Reyes- will be to help adolescents access universally information, education and sexual and reproductive health services, for decision-making, free, responsible and without coercion about their sexuality.

In the new plan they recognize their sexual activity. That is why access to contraceptives will be facilitated. Young people will be educated so that they draw a plan of life. In 2014, 39% of women aged 15 to 19 reported having had sexual experience.

Of these, 7.5% had their first sexual relationship before 15. The 90% of children under 15 were with older men, noted Deputy Minister Durán. Natalhy (protected name) got pregnant in the first year of high school. She was 15 years old and his partner was 18. He was born 10 months ago, prematurely, at Isidro Ayora.

The young woman also went to the adolescent area. There, Patricio Jácome, gynecologist leader of the service, reported that among the girls there is evidence of lack of information on sexual and reproductive health. In the area of psychology, says, young mothers confess that they did not know they could get pregnant by having their first relationship.

The new strategy, he says, should improve access to sexual and reproductive health information. “The educational talks should be addressed to young people, teachers and parents.” Sarah gave birth to her first child in June 2017. A few months later she was pregnant again.

According to the young woman, her partner, 19, refuses to use a method of contraception planning. Other girls tell that their partners asked them to go to the toilet and urinate after the sexual encounter, to avoid pregnancy. Jácome said that many young women have a “magical thought” about fertility and pregnancy.

Former President Rafael Correa promoted the Plan Familia, with a focus based on abstinence, according to his critics. The new intersectoral strategy will be officially presented between June and July, once its investment budget is approved. (I)