After the transfer of the registration proficiency to the Municipal Transit Authority (ATM for its Spanish acronym, last July 1 from 06:30 am, the new vehicular technical review process began, causing problems and complaints from the citizenship.

The problem began with the misinformation of dozens of people who wanted to carry out paperwork that did not correspond to ATM’s responsibilities and also over the uncoordinated SGS consortium staff, who failed to guide people, especially after 11:00 when the system collapsed and criticisms multiplied.

According to Andres Roche, manager of ATM, the delay was caused by some settings in the IP addresses of the computer system of SGS, which emerged on the last minute. However, users complained that after allegedly overcome the problem, some received the “sticker” with the license plate and the year 2014, after two or more hours.

When complaints about the lack of attention on the paperwork incumbent on the ATM escalated, Xavier Sandoval, chief information officer of the entity stated that all activities were suspended and that tomorrow (today) they would resume the process. 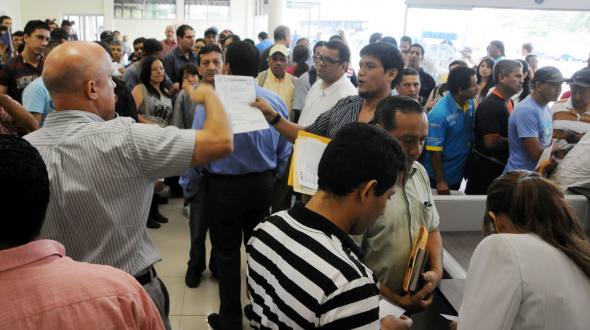