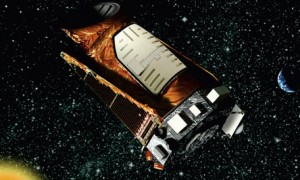 NASA has announced its discovery of a new solar system called Kepler-11 which has six planets around it.

Kepler-11 system is the largest extraterrestrial solar system discovered until now. The sixth planet of the discovered system is called Kepler-G; it takes 118 days to orbit the sun, its mass is estimated at 300 times the Earth, while the five smaller planets of Kepler-11 have very short years, going around its star in less than 50 days, they also have a very compact configuration, all of them are within the orbit of Mercury, if a theoretical exercise is make to overcome its stars with ours.

Kepler-11 was discovered with the Kepler space telescope, which was launched into space in March 2009 to find and study the extra solar planets, NASA scientists have announced that using the same space telescope they have discovered five possible planets with Earth size, but this is not confirm yet. In addition, it could be in the called habitable zone, this means at a distance from its star that could allow them to have liquid water.

The new planetary system is so interesting and there are such many unknowns to solve that scientists have already announced that they will try to keep the telescope in orbit so that they can study more details.