Next IACHR session will be in Mexico 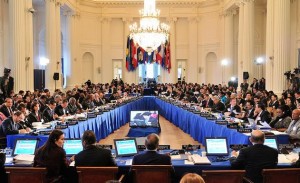 The extraordinary meeting of the Inter-American Commission on Human Rights (IACHR) will be in Mexico.

The event will run from August 11 to 15. The Commission noted that “it is willingness to conduct sessions away from its venue in response to the invitation made ​​by State Members of the Organization of American States (OAS)”.

During the last meeting of the OAS, Foreign Minister Ricardo Patiño, insisted on a project of reforms to the IACHR that suggested to move its venue from the United States, which has not ratified the American Convention on Human Rights.

Finally, a resolution that proposes to hold its future meetings in Member States such as Mexico, Uruguay, Paraguay, Chile and Haiti was approved.