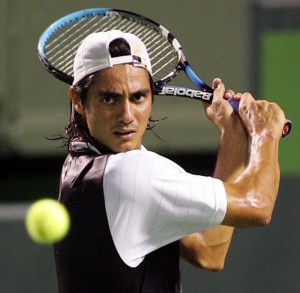 The career of the Ecuadorian tennis player Nicolas Lapentti has been recognized by the National Assembly as it has awarded him the Sports Merit Medal “Vicente Rocafuerte”.

At an event held at the Legislative Palace at 10:00 am, First Vice President of the Assembly, Rolando Panchana, awarded Lapentti in the presence of his parents, the chairman of the Assembly, Fernando Cordero, and former tennis player Luis Adrian Morejon.

Among the most important tennis titles that Lappentti –who was born in Guayaquil– won are the ATP in Bogota (1995 and 1997), Amsterdam ATP doubles (with Paul Kilderry), and Mexico (with Daniel Orsanic). He also competed in the Atlanta 1996 Olympic Games and Athens 2004.

Lapentti retired from professional tennis in January this year due to a knee injury.