Travel expenses reports from the Ministry of Finance and Petroecuador show that the presidential plane was used on at least three occasions, between November 2016 and January 2017, for contract negotiations with the state oil company. 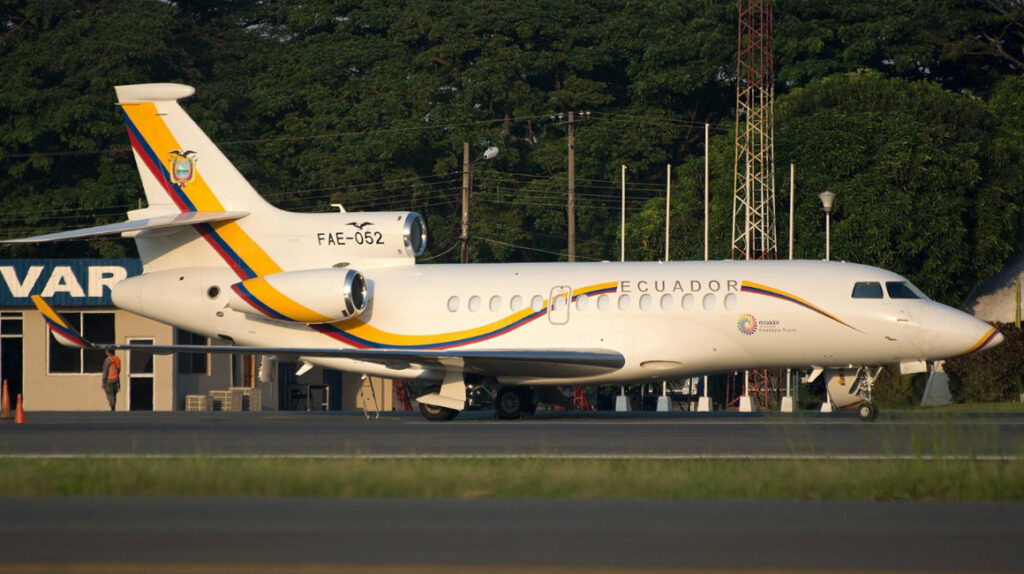 The Falcon 7X presidential plane, at the Guayaquil airport.

The investigations of the Prosecutor’s Office around the corruption in Petroecuador’s oil pre-sales contracts have turned their eyes on the movements of the presidential plane .

The investigations found that at least part of the negotiations of these contracts was done with the approval of the Presidency.

The Prosecutor’s Office focused on a trip, made in January 2017, in the last months of the Rafael Correa government.

PRIMICIAS identified at least two more trips in which the presidential plane was also used so that Nilsen Arias, then manager of International Trade for Petroecuador, would travel together with his team.

The delegations on the three trips were made up of personnel from the Ministry of Finance and Petroecuador.

The Ministry of Finance was in charge of coordinating with the Presidency of the Republic to request the aircraft; the trades are signed by the former ministers of that portfolio, Fausto Herrera and Patricio Rivera.

In the three trips you can find two names always present : Nilsen Arias and William V., who was Undersecretary of Public Financing of Finance, and is one of those prosecuted by the Prosecutor’s Office.

According to the available reports, the travel expenses reported by each official on these trips were USD 2,000 on average.

According to the Prosecutor’s Office, oil pre-sale contracts were negotiated on these trips, but the delivery of bribes was also coordinated.

On November 1, 2016, the then Deputy Minister of Finance, Madeleine Abarca, requested the authorization of per diem for Minister Fausto Herrera, his adviser Paúl Villarreal and for William V. , Undersecretary of Public Financing and one of those prosecuted for corruption in Petroecuador.

The trip would take place from November 6 to 16, 2016, with the aim of “continuing the negotiation processes for the investment programs and projects that the Republic of Ecuador is currently executing.”

And it had several destinations: Madrid, Dubai, Bangkok, Paris, Luxembourg and New York.

According to the report, the trip was made in one of the presidential planes.

According to the Petroecuador per diem reports, in that delegation were also: Pedro Merizalde (then manager of Petroecuador), Nilsen Arias and two members of his trusted team: Galo G. and Santiago P.

The objectives of the trip of the four Petroecuador officials are not clear. The state-owned oil company does not allow downloading the reports on said voyages.

Whereas in the Finance reports the details are succinct. William V.’s report says that there were work meetings “that allow continuing with the processes for the timely achievement of financing.”

Another trip the same month

The civil servants returned from their tour on November 16. Five days later, Minister Herrera already requested the use of the presidential plane again.

In a letter addressed to Verónica Álvarez, undersecretary of the Presidential Office , dated November 22, Herrera asks her to use the aircraft for a new transfer.

The dates of this trip are from November 28 to December 8, with the aim of participating in ” several meetings of the utmost importance.”

Herrera informs that the entourage would be made up of him, Grace Rivera (then institutional manager), William V., Nilsen Arias, Pedro Merizalde and Mauricio Jaramillo, then legal director of Petroecuador. The destinations were Buenos Aires, Bangkok, Dubai and New York.

This transfer was made in the Presidency’s Falcon 7X aircraft.

William V.’s report says that in Bangkok (Thailand) meetings were held with “international financial companies such as PTT – International Trading PTE, in order to finalize the contingent liability commitment in relation to the contract for the purchase and sale of crude oil”.

PTT, or Petrotailandia, is one of the companies that has oil presale contracts, and would be one of those that paid bribes to Nilsen Arias.

A short time later, Finance asked for the presidential plane again. By January 2017, the minister was Patricio Rivera, and he sent a letter requesting the use of the aircraft for a new trip.

This transfer would be between January 21 and 28, 2017, with a single stop, in Dubai . This is the journey that the Prosecutor’s Office has focused on in its investigation of Nilsen Arias’ trusted team.

On this trip, the delegation was made up of William V., from Finance, and from Petroecuador were Pedro Merizalde, Nilsen Arias, Santiago P., Galo G. and Andrés R.

The purpose was to hold meetings with Petrochina, Unipec and Oman Trading, three of the companies that would be involved in the payment of bribes through the intermediaries Gunvor and Vitol .

Again, Petroecuador travel reports are not available. However, the report by William V. assures that a negotiation was being carried out for the purchase of LPG with Oman Trading, for USD 200 million. According to what he said at the hearing, that negotiation never materialized.

Correa seeks to wash his hands

After the revelation of the use of the presidential plane for the transfer of people now prosecuted for corruption, former President Rafael Correa tried to link the current government with the case.

But the message was removed a few minutes later from the former president’s account.

However, the Minister of Government, Francisco Jiménez, and the Foreign Minister, Juan Carlos Holguín, shared screenshots of the post and ruled out any link between the current government and the case.

Alerts about irregularities in Petroecuador began in 2008