No Official Statement from the Ecuadorian Assembly 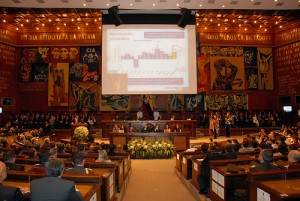 On an interview with Ecuavisa TV Channel, Fernando Cordero, President of the Ecuadorian Assembly, said on Tuesday he believes it is neccesary to stay in the State of Exception in the Capital of the Country, Quito. This State of Emergency was a decision taken by President Correa after the police protested and rebelled against him on September 30th.

However, Cordero believes the measure “cannot last more than 60 days” because the it’s in the Constitution. “The Assembly can interrupt it anytime”, he added. The President of the Legislative power added they’re currently protected by the Military and the environment at the Assembly is normal and quiet. He explained they’re currently investigating people who participated in the uprising and also other State entities.

The Police uprising left nearly 10 people dead and more than 270 people hurt. Members of the Assembly were also hurt during the incidents with the police on September 30th. The Police abandoned the General Assembly, leaving the legislators unprotected. Military officials are taking care of the National Assembly at the moment.

According to El Universo newspaper, Juan Carlos Cassinelli, Head of PAIS (the Policital Party of the President) affirmed the resolution project of the Assembly in response to the Police uprising will be more severe. Another member of PAIS, Ángel Vilema, agrees on the fact most of them were willing and able to be present at the Session on September 30th, but they agree with Irina Cabezas, Acting President of the Assembly at the moment who concluded the Session because she said there was not enough security.

Several members from the Opposite Parties to the Government have critiziced this decision. “At 17h00 there wasn’t one single person dead yet, and the massacre could have been avoided.” said Alfredo Ortiz who added that the Acting President “received the order of not making the session from the Ministry of Government. That was the main cause of the incidents that night, when the confrontations between the military and the police occured”. Paco Moncayo, former Military, said it was regretful Cabezas decided to cancel the Session because “it was precisely in that moment when the Country needed a response from the Assembly to support Democracy”. Jorge Escala, another opposer of the Government, said that the incidents wouldn’t have happened if PAIS would have been more flexible in their position towards the Public Service Law and if the Political Party would have supported the Bills that the Assembly had previously approved. Nivea Vélez, said on Monday that the actions of the Assembly were “shameful”, because it was the “place to talk about the conflict and avoid having so many deaths.

El Universo newspaper informed earlier on Tuesday that PAIS plans to strenghten their Statement against the incidents of September 30th and ratify their position on the fact there was indeed a Coup Attempt on that day. Their Statement also attemps to ask the General State Attorney to investigate the incidents.

Irina Cabezas, the legislator who served as Acting President the day of the incidents, told El Universo on Monday that “the group of insubordinate policemen who kidnapped the President wanted to blackmail the Assembly by forcing us to change the Law in order to release him”.

Nobel Peace Price of 1980 and President of Chile Visit Ecuador