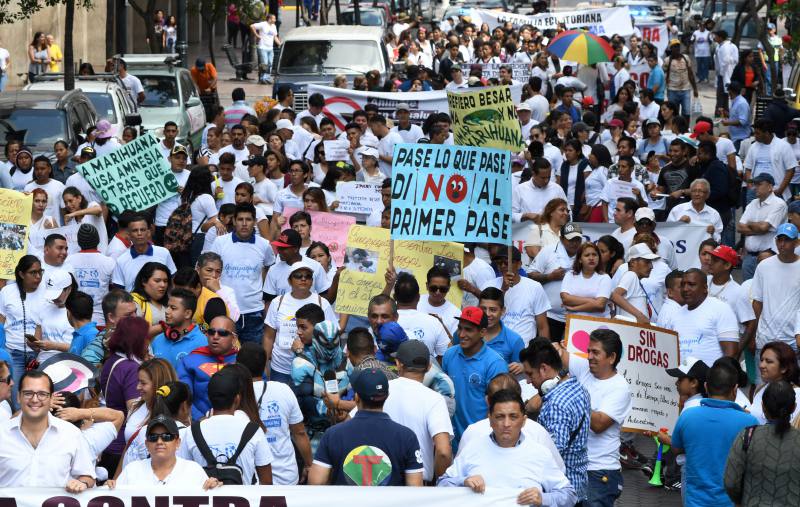 They walked along 9 de Octubre Avenue, from Plaza Centenario to the Simón Bolívar Malecón, in the center of the city, and on their route they exhibited posters and banners in which they read: “We already have two legal drugs, alcohol and tobacco. We do not want more! “,” No legalization of marijuana, among other phrases.

There were at least 300 people, among them, parents who with the demonstration held yesterday morning expressed their disagreement with the content of the Organic Health Code (COS), which is processed in the National Assembly.

“As a family we are going to fight so that this does not kill the lives of our children. They intend to legalize marijuana under the pretext of being medicinal, “said Julieta Sagñay, a psychiatrist specializing in addictions who participated in the walk that had the protection of civilian transit agents.

The mentioned legal body has had several controversial issues within the debate. For example, the use of cannabis for therapeutic purposes, the subrogated stomach, the living will and the creation of a National Health Council to control the entire national system.

Sagñay said the country is not yet ready to implement medical marijuana. She said that while in other countries that has been established as a state policy has been by the number of deaths caused by the use of heroin.

The woman mentioned that they do not rule out making their position to the National Assembly.

During the walk the young people who participated in the activity shouted slogans such as: “Whatever happens, no to the first pass”, referring to drugs that are consumed by inhalation such as cocaine.

Some participants wore superhero costumes. However, most wore white shirts.

“We say no, not to drugs, not to marijuana. Yes to a comprehensive policy on drugs, and that President Lenin Moreno should take it into consideration, “said former Health Minister Francisco Andino, who was on the walk that began after 09:30 and ended at 10 : 30

Byron Mackay, representative of the Behavioral Clinic, said with concern that every time in the streets there are more young people consuming the drug known as H.

At the beginning of last May, a group, however, made a walk in the city in favor of promoting the legalization of marijuana.

With observations from 858 organizations, the Organic Code of Health entered the stage of definitions of texts for the second and final debate.

A draft report serves as a basis to ratify or modify the final texts. It has 393 articles and 62 general, transitory and derogatory provisions. (I)

Onion producers on alert for smuggling from Peru