No traces of their bodies, one month after the kidnapping in Mataje 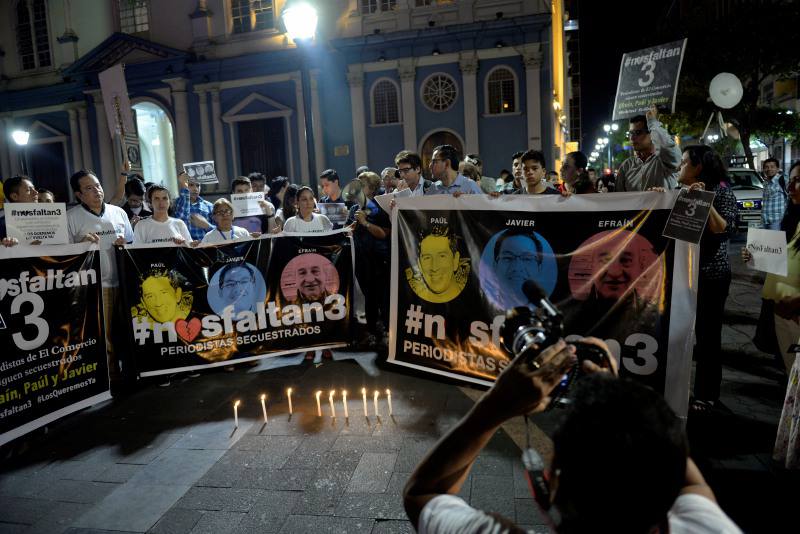 The cameras of the hotel where they had stayed the night before were recorded on the morning of Monday, March 26, when they left for work. It was around 07:00. Efraín Segarra, driver; Javier Ortega, journalist, and Paúl Rivas, photographer, climbed into the van of El Comercio and set off on their way to Mataje, parish of the San Lorenzo canton.

They were the last images that were filmed from them in freedom. To 1.5 kilometers of arriving at the population of Mataje (that is to 20 minutes of San Lorenzo) passed the last military control of that then. There they were registered. After that, nobody saw them again.

A month after the kidnapping and after thirteen days of the official confirmation of their murders, it is still unknown where their bodies are in Colombia. And their relatives, friends, colleagues and civil society keep vigils to demand answers from the authorities and so that their remains can be repatriated.

On the night of March 26, the National Government formed a crisis committee and met with executives and family members of El Comercio’s journalism team. Hours later, at dawn, the Ministry of the Interior informed the country, in a statement, of the possible kidnapping of the workers.

And since that March 27 the struggle in the streets and social networks with seedlings, orders and prayers has not stopped. The kidnapping was attributed to the Colombian armed group Oliver Sinisterra, led by Walter Arizala Vernaza, aka Guacho, who was also held responsible for the attacks this year and the death of four sailors on the northern border in Esmeraldas.

On April 3, the first proof of life of the hostages was made public: a video in which Ortega said the orders of the kidnappers. And although President Lenin Moreno had said they would do the impossible to bring the journalism team alive, Minister César Navas said on April 9 that they were not in negotiations with the captors.

On April 11 there were rumors of the murder of the journalists, which was only confirmed by Moreno at 12:40 on April 13, after the deadline he gave to the captors had expired. (I)