Nobody pays profits, everyone awaits the failure 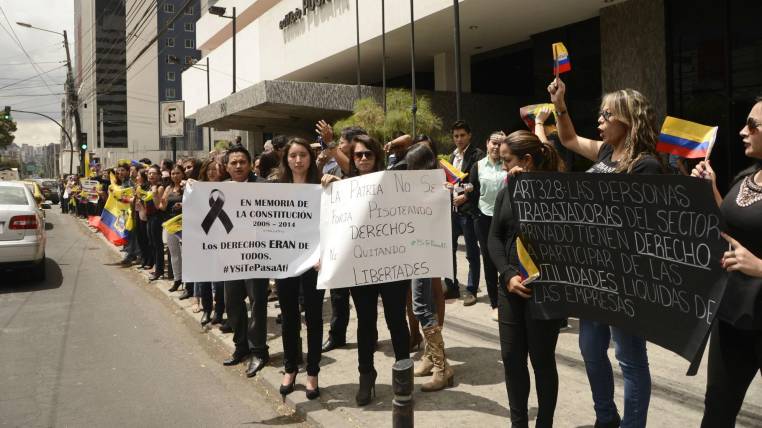 “I have asked the companies to wait until the last to pay the utilities, to give a space to the Constitutional Court (CC) so that he can solve and not have the problem, then, in the return of the money, better pay directly to the workers, “said the Minister of Labor, Raúl Ledesma , during his appearance at the Workers’ Rights Commission of the Assembly.

He argued that the Government expects the control body to rule this month on the seven unconstitutionality lawsuits that were presented to the Labor Justice Law, regarding the limit to the payment of profits , which may not exceed the 24 Basic  Unified Salaries.

The plenary of the Court received the plaintiffs in public hearing on Tuesday to hear their arguments for the challenge, and prior to making a final decision. Ledesma, as he said EXPRESO, ratified that the Government is against the limitation of profits, stating that it is an acquired right of workers. This benefits employees especially from the oil, cement, telecommunications, beverages, retail areas .

During this hearing, the lawyer of the Presidency of the Republic, Michell Pineda, made clear the position of the   Executive , and requested the magistrate “that in the subject of the utilities modulate his sentence”.

Regardless of what the CC may decide, the Workers Commission continued yesterday the process of the project of reforms to the Law of Labor Justice that seeks to eliminate this limitation. In this context, Minister Ledesma proposed two transitional provisions to be included by the legislative bodies. The first determines that once the reform is in force, the Ecuadorian Institute of Social Security (IESS), within 30 days, return the values that have been deposited by companies of private employers for surplus of the profits of the workers of 2016.

The second provision establishes that private companies or employers, within 30 days, counted from the return of the securities by the IESS, will proceed to distribute profits to their workers.

“This is because the bill indicates repeal, but does not indicate the return,” said Ledesma.

“They invested in education”

Eduardo Mora, one of the leaders of the collective of workers And if it happens to you, he said to   Daily   EXPRESS   He expects the Court to rule in favor of eliminating the ceiling on profits. He stressed that within the group there are people who charge the basic salary and with the utilities could have a better standard of living. According to the survey done by him within the group, the majority used the money from the utilities for education and health. He also stressed that in the group there are those who have family responsibilities with catastrophic illnesses and need that money.

Juan Carlos Oleas is one of those affected by the profit ceiling that signs the complaint filed before the Court. He indicated that last year did not meet 5%, which is the family burdens. But this year it is waiting for the decision of the Court, and expects that the roof of utilities will be totally eliminated. He explained that the money earned helped many to enter to buy a house and, in other cases, to do masters. For example, Oleas is an engineer in  Electronics and Telecommunications , a profession that demands a constant updating of knowledge and with the profits is that those courses are paid. (I)

Narcos are in distress to border towns of Esmeraldas