Six destinations boosted banana exports in 2019. 34.2% of shipments made between January and November last year corresponded to countries in the Middle East, Asia, Eastern Europe, Africa, Oceania and EFTA. 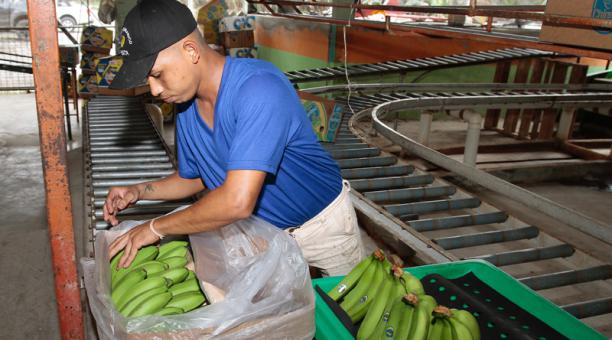 Demand from these markets offset the reduction in shipments to traditional destinations, such as the European Union (EU) and Russia, which registered a 17.4% drop .

According to data from the Association of Banana Exporters of Ecuador (AEBE), in the 11 months of 2019, 322.7 million boxes were exported , 1.65% more compared to the same period of 2018. The guild considers a “ growth low ”, since it would close the year with an annual increase of less than 2%.

Raúl Villacrés, director (e) of AEBE, said that non-traditional markets contributed enough volume so that exports did not decrease. Of the global figure, the six destinations contributed with a demand of 110.4 million boxes.

In Japan, for example, Ecuador is the second largest exporter after the Philippines.

Algeria registered a growth of 258.3% and that pace is expected to continue this year, Villacrés explained. For this year it is estimated that the fruit will be consolidated in the former Soviet republics, where Ecuador is the main supplier.

In the case of China, we will have to wait for the panorama to be presented, since Colombia and Mexico have put “their eyes on that market”, where their fruit enters with zero tariff for trade agreements.

The Agzulasa company has chosen to diversify its market with these destinations.

Marianela Ubilla , representative of the exporter, said that Ecuador was able to take advantage when the Philippines focused on exporting to China and set aside the Middle East area. “The space was open and the country took advantage of it.” In addition, he said, these destinations received the product that could not be placed in the EU.

The European consumer is demanding more other types of exotic fruits , such as avocado, pineapple, melon, blueberries. To this is added that competitors such as Guatemala offer a banana that is USD 0.50 cheaper than Ecuadorian.

The demand for fruit by the EU has reached a ceiling that is no longer going to grow , exporters warn. All this explains why that market is no longer as profitable as it was before, says Richard Salazar , executive director of the Banana Marketing and Export Association (Acorbanec).

He believes that the great challenge is to keep the current shipments to that destination, which remains the main one for the country. A positive element is that Ecuador now competes with Colombia and Peru in equal tariffs, since since this year the three pay 75 euros a ton.

On an internal scale, bananas face three major challenges. Since last August, the sector has been alert to prevent the entry of the Fusarium fungus race 4, which was detected in Colombia . This demanded the implementation of biosecurity plans within the farms. Another measure was to build large disinfection and control structures in ports and airports.

For Édgar Morales , administrator of the María Paula estate, this represented a 10% increase in production costs per box.

Upon entering your farm , in the Roberto Astudillo parish , in Guayas, you can see the pebbles (areas for disinfecting footwear for entering farms) and the live fences planted around the plantations. Details are still missing to comply with all biosecurity parameters . The producer has 90 days to complete that task.

Another challenge before the end of 2019 was to distort the presence of the humpback fly in the fruit sent to Russia.

Gustavo Martínez , deputy secretary of Musáceas of the Ministry of Agriculture and Livestock (MAG), said that a rapid intervention has been made to avoid a possible restriction to that country. “The authorities of both countries have direct communication and all the required information has been sent,” he said.

Agrocalidad, in articulation with Iniap, has carried out inspections of more than 14 farms to verify that there is no presence of the insect.

Russia is the second destination in the amount of shipments, with 68.5 million boxes, after the EU. Ecuador is the main supplier of that market.

As it is one of the most important niches, the controls in ports have been reinforced and a new protocol has been set up to send the fruit to that country. By the middle of this month, a public and private sector delegation is scheduled to travel to Russia to address this issue, taking advantage of the Fruit Logistic in Germany.

In addition, it is planned that in those days the same team will visit Brussels, to solve the issue of Minimum Residue Limits (MRLs), which the EU requires in the use of pesticides.

These three points are part of the roadmap that the sector has set for 2020. The banana cluster, which is made up of five guilds of producers and exporters, requested the MAG and the Ministry of Foreign Trade to resume the Treaty agenda Free Trade for this 2020.

Among the requests is the Government’s response to expedite the prompt approval of the treaty with EFTA and boost trade relations with Asia, Canada and Euroasia.