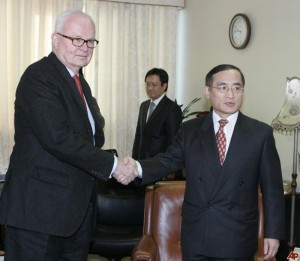 The Pyongyang regime proposed today a dialogue without conditions with South Korea to solve the crisis among them. This was informed by the North Korean state agency KCNA.

According to the communication of the KCNA, the dialogue would treat peace issues, reconciliation, unity, and cooperation from both countries. But to let it occur the political parties and the social organizations of North Korea must cease the taunting each other and create a good diplomatic atmosphere.

The relations between both Koreas were affected by the North Korean attack on the South Korean island of Pyongyang. On New Years Eve the South Korean president, Lee Myung-bak assured that they are willing to talk with North Korea even after their hostilities.

The American, Stephen Bosworth, and the South Korean Nuclear negotiator, Wi Sung-lac, agreed on Seoul that the future of the conversations for the nuclear disarm of North Korea must be an honest compromise.