North of Spain on high alert by waves of 17 meters 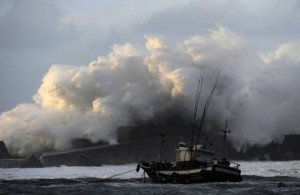 North of Spain on high alert by waves of 17 meters

Gusts of up to 130 km/h and waves more 17 meters is witnessed in the North of Spain by what the civil protection and emergency services of the Spanish Ministry of the Interior had been activated in the morning in Galician and Cantabrian “Sea storm alert”.

In Galicia, in the Northwest, the heavy seas came during the afternoon from the top of a lighthouse, in the town of Burela, according to local sources.

In Asturias, the force of the waves “has taken another 20 meters of the dock of the port of Cudillero and has sunk two small boats that were at the port”, said the spokesman.

Elsewhere in the region, several rivers overflowed flooding docks and cutting off roads.

The storm should also affect the East of Andalusia, in the South of the country, the region of Catalonia, in the Northeast, the archipelagos of the Balearic Islands, in the Mediterranean, and the Canary Islands, in the Atlantic, and the enclave of Melilla North African, according to a statement from the Civil protection.