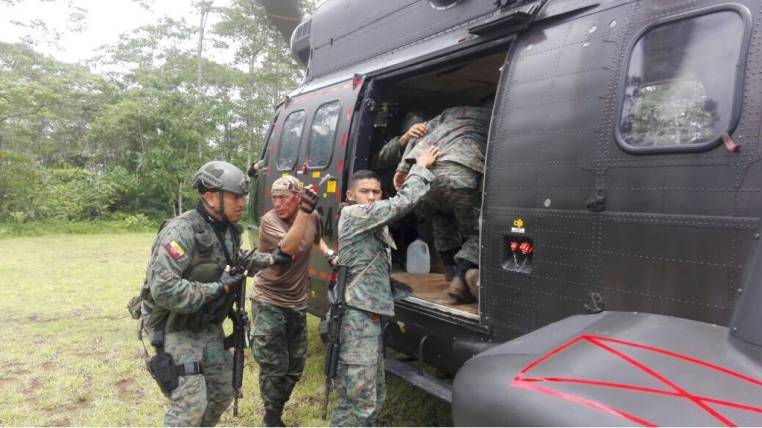 We saw it coming for four years. A confidential report of the Senain of February 2014 analyzed the situation of the Esmeralda border and anticipated what is now happening: the proliferation of illicit activities, criminal gangs, armed confrontations.

The Ecuadorian Government was warned. Already at that time it was known that the 30 and 48 fronts of the FARC had allied with local mafias to provide drugs and supplies to the Sinaloa cartel; that the shipments left from the ports of Buenaventura (Valle del Cauca), Tumaco (Nariño) and San Lorenzo (Esmeraldas); that two thousand guerrilla troops and 300 mercenaries of the military bands controlled the routes and operated on the border with direct incidence on the province of Esmeraldas; that there were 43 illegal steps identified between the two countries … The ‘Report on demobilized FARC to Ecuador’, to which this newspaper had access (a five-page document with an annex of 15 Power Point sheets), shows that the country He was aware of all these movements and did little or nothing to prevent their consequences.

In 2014, the second year of the peace talks in Havana, the Colombian government and the FARC came to reach the most controversial of their agreements: the one that opened the doors of political participation to the rebels. The next item on the agenda was one in which the guerrillas had to give in: drug trafficking. Everyone agreed on this point. And that was a problem for Ecuador. Because, even supposing that the participation of the FARC in the business was reduced, as they say, to the collection of a tax for grammage, this is a business that involves hundreds of millions of dollars. Between 500 and a billion, says the report.

Four years ago it was obvious (it was for the Senain) that around this point most disagreements would occur regarding the peace process: people of the FARC who were not willing to undergo the reintegration process, preferring to keep its participation in illicit businesses “employing Ecuador (according to the report) on a recurring basis”.

Was the country prepared to face this challenge? No, says the report. And he talks about “insufficient police and military personnel to control the border”; lack of coordination among the different institutions of the State regarding the handling of information, especially of the migratory system, and “lack of a comprehensive border security plan”. So things, the scenarios that awaited Ecuador around the corner were discouraging. The report speaks of an imminent increase in crime rates and illicit trade; “Greater drug trafficking and violence”; “Violent attacks”; “Increase in the population involved in crime”. Four years later, everything is being carried out to the letter.

Could it be avoided? To reverse the process, the 2014 report proposes at least three measures whose application was omitted by the Ecuadorian Government to this day.

The first is the most obvious: “increase in the police and military presence in the most sensitive points of the border.” On this there is contradictory information. Between 2010 and 2015, the Ecuadorian security and defense authorities provided the official figure of 10 thousand soldiers stationed at the border. This week, Interior Minister César Navas explained that the reinforcement of the border started last October and that, to date, there are already 12,000 troops in the area.

The second recommendation is to establish an information exchange agreement with the Colombian Public Prosecutor and Police. This agreement just began to materialize, again four years late, last February, following the first attack in San Lorenzo.

The third recommendation is the most important, since it marks, according to the report, the difference between the success and failure of the security plans for the area. It is about promoting and designing “development programs for the increase of legal business activities, with the support of private capital and the creativity of society in general.” In a province that continues to lack the most elementary, such as drinking water, it is obvious that this was not done either.

Who knew this report at the time? Why were not the necessary corrective measures taken? Today, Minister Navas assures anyone who wants to believe that the recent acts of violence are, precisely, “the product of the permanent presence of the Ecuadorian State, with clear policies to directly confront organized crime.” The Senain report of February 2014 seems to suggest the opposite.

“The Armed Forces, I get the impression, have not had the intelligence action due to the fact that the previous government was worried about spying on its adversaries instead of detecting the threats.”

“What they want (the subversive groups) is to sow terror in all the populations and they are fighting for a territorial system. It is the worst thing that can happen if we do not use the weapons within our reach. ”

Colonel retired from the Army

“As the State has arrived late (to the border area), the drug traffickers crowd out the unemployed citizens. They give them work and they have the best ally and the best intelligence service in the population. ”

“I feel indignation at the lack of planning, a generalized disorder, absurd creations of a state of siege. Where are the internal defense plans? All that bothers. ”

Former Chief of the Joint Command

“Urgent actions are necessary: Establish a Defense policy; appoint a representative authority and a single authority to centralize information and make decisions.” (I)