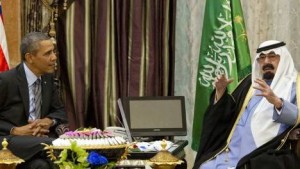 King Abdullah of Saudi Arabia received this Friday to the U.S. President Barack Obama, on his farm in Rawdhat Khuraim, an oasis a hundred kilometers to the north of Riyadh.

The Saudi displeasure with American policies in the area by the recent U.S. approach to Iran, the neighbor country which competes with Saudi Arabia  for influence in the region, became evident. The White House itself has recognized and informed that Obama’s visit is an attempt to smooth things over and reassure the Saudis about their commitment to the Kingdom and the region.

Meanwhile, King Abdullah has demonstrated its interest in maintaining a dialogue channel at receiving the president despite his delicate health.

For his part, the Vice Director of the U.S. National Security, Ben Rhodes, assured that bilateral relations were now “better than last fall when we had some tactical differences in our policy about Syria.”

Since then, according to him, the U.S. and Saudi Arabia have worked to coordinate their assistance to the rebels.

Defense Ministers of Chile and Ecuador will meet in may