Obama receives recognition from the Jewish community in Hollywood 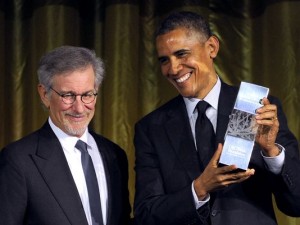 At the Shoah Foundation Gala, President Barack Obama praised the work it does

To mark the 20th anniversary of the Shoah USC Foundation, the U.S. president, Barack Obama, gave an impassioned speech to about 1,300 people, where he praised the work done by this foundation created by Steven Spielberg, which is dedicated to register in video testimonies of Holocaust survivors and witnesses.

`It behooves us to speak out against the rhetoric that threatens the existence of the Jewish territory and maintain an unwavering commitment to Israel’s security,´ were the words of Obama, who received the award of Ambassador of humanity, at the gala where Bruce Springsteen sang.