Objections to possible changes in contribution of social security affiliates 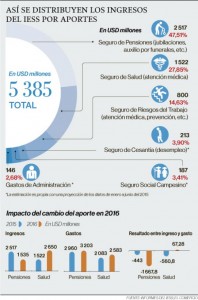 Possible changes in the rate of contribution made by members and employers to the Ecuadorian Institute of Social Security (IESS) generates at least four concerns. The main is of legal nature.

The Board of IESS is considering reducing the money received by the Pension Insurance, to solve the serious financial situation experienced by the health fund, which covers medical care of members and retirees.

The idea, based on a study by the firm Volrisk raises the money reduction to insurances for Pensions and Labour Risks and give more resources (about four extra points) to Health. The proposed measure will last five years and will be implemented according to a table.

Ports affected by falling imports and exports and shipping rearrangement