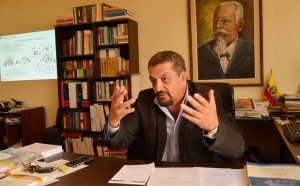 A record of “civic commitment” for electoral control will be signed on January 25th among political, social, student, professional and trade union members, to generate a “counterweight” to the electoral body during elections of 2017.

The Citizens Electoral Observatory is made up of fifteen people behind this project, which will cost $ 3.9 million, said its coordinator, Fausto Camacho, who showed yesterday a list of the groups that would join.

The project includes the creation of a platform called ‘Watchout your vote,’through which the participation of citizens is promoted. The Kruger Corporation, specialized in technological innovation, will implement it.

The Observatory will convene citizens between 15 and 30 years old to form the so-called Citizen Network for Democracy, for which 42 000 volunteers and 2000 coordinators would be required in the country.

The monitoring process will be applied to the forming process of the Provincial Electoral Boards; selection of members of the polling stations; monitoring of the election campaign; scrutiny control and broadcast of election results.

The reply to the official speech